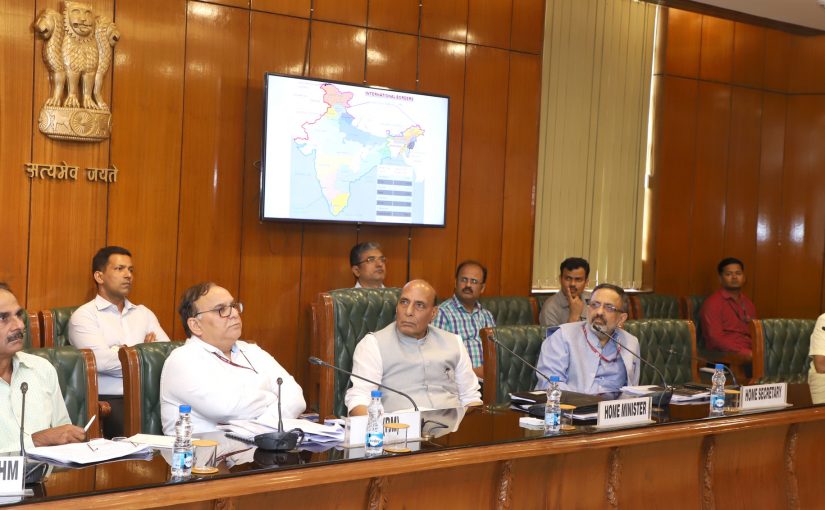 With regard to the Indo-Pakistan border, Home Minister expressed satisfaction that 97% of the sanctioned border fencing work has been completed. Shri Rajnath Singh also reviewed implementation of pilot projects on Comprehensive Integrated Border Management Systems (CIBMS) on non­physical barriers. He also stressed to utilize the space technology for strengthening the border guarding and policing.

He stressed that coastal security is of utmost importance and appreciated action taken by State Governments and UTs for operationalization of 194 Coastal Police Stations duly equipped with boats and other equipments. He underlined the need for better cooperation among various agencies engaged in maintaining coastal security.

He directed that the next phase of the coastal security scheme should be expedited in consultation with stakeholders like Navy, Coast Guard, State Governments, etc. He complimented proactive role being played by Central Armed Forces and Navy and Coast Guard and directed that vigil may be maintained on all borders including coastal areas while protecting all legitimate and humane considerations of local population.

Identifying that land acquisition remained an issue, he called for expediting the same especially along the country’s Eastern borders.

HM also reviewed working of Border Area Development Plan and directed that all border States should send their annual action plans to MHA for release of funds quickly and all schemes and projects under BADP should be implemented at fast pace.