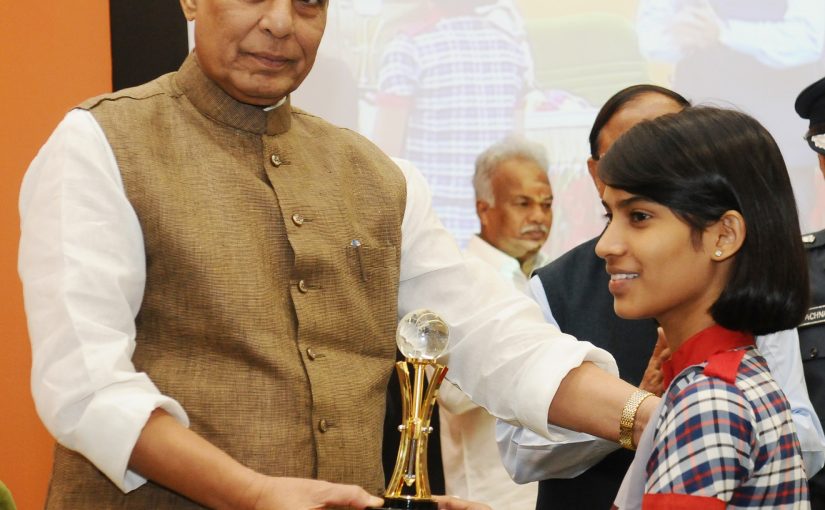 The Union Home Minister Shri Rajnath Singh inaugurated the 2-day National Level Conference on “Capacity Building of SDRFs-2017” here today. The conference is being organised by National Disaster Response Force (NDRF). The conference aims to develop synergies between the responses of National & State Disaster Response Forces (SDRFs) and to highlight way ahead to strengthen the response capabilities of SDRFs.

Speaking on the occasion, Shri Rajnath Singh said that disaster has no geographical and physical boundaries, so we must think beyond boundaries for effective management of disasters. The places which were considered secured till now, are also facing threat of disasters due to increasing population and urbanisation, he added. The Minister said that the primary responsibility to deal with disasters lies with the states, so the States should be prepared in advance to mitigate the risk related to disasters and take the necessary action. He emphasized on the need of strengthening SDRFs by specialized training and equipping with latest gadgets and tools, improving bilateral and regional cooperation among states so that States can help each other at the time of disaster. He emphasised that some states have prepared roadmap for the next ten to fifteen years in this regard, but all states will have to progress with equal pace, if India has to be disaster resilient as a nation. He also appealed to the States to modify and implement the best practices of other states in tackling disasters. He said that the risks arising out of development shall also be taken into account and focus should not only be on mitigating the effects of disasters.

Shri Rajnath Singh said that our focus has shifted from disaster management to disaster resilience. He said that the funds allocated to State Disaster Response Fund (SDRF) have increased from Rs 33,581 crore during 2010-15 to Rs 61,220 crore during the period 2015-20, thereby registering an increase of 82%. He also said that 2 additional NDRF battalions have been raised in Varanasi and Arunachal Pradesh to strengthen its infrastructure. He said that the assistance given under NDRF has been increased from Rs 3,461 crore in 2014-15 to Rs 11,441 crore in 2016-17, in case of severe disaster where there is insufficient fund under SDRF. He said that under National Cyclone Risk Mitigation Project (NCRMP), Phase II, an additional assistance of Rs 2,361 crore was sanctioned for six states in July 2015.

Addressing the gathering, Dr. P. K. Mishra, Additional Principal Secretary to the Prime Minister, said that it is for the first time in the last few years that, such a national level conference is being organised with the participation of most of the States. He said that NDRF is not like any other force in the country, as it undertakes many exercises like mock drill, capacity building, community awareness programs, school safety programme, etc. He said that the focus of NDRF is on three aspects, namely, specialized training for search and rescue, capacity building of other agencies and preparedness. Dr. P. K. Mishra said that preparedness is as important as responding to disasters. He said that unless the community is well prepared to deal with different kind of disasters, the response will not be that effective.

During his address, Shri R K Pachnanda, DG, NDRF, said that India being a very large country is vulnerable to many disasters such as 58.6% of area is prone to earthquakes, 12% of area is prone to floods and the coastlines are prone to cyclones. He said that NDRF has saved the lives of more than 5 lakh people and also sensitized and trained more than 50 lakh people. He said that the efforts of NDRF have been appreciated not only in India, but also abroad. He emphasised to strengthen the capabilities of SDRF by providing specialized training and equipping with latest disaster managements equipment.

As a special initiative for boosting the confidence and skills of the Students, NDRF conducted various mock drills and school safety programmes during last one month in all Kendriya Vidyalaya Sangathan Schools of Delhi & NCR and other parts of the country. Under this campaign, Inter- School, School Safety Mock Drill competition, and Inter School – Open Essay competition on “How will I respond in case of an earthquake” were organized. Kendriya Vidyalaya Sangathan (KVS), Sadar Bazar, Delhi Cantt. was the winner of Inter School Safety Mock Drill Competition. Ms. Sneha of KVS, AGCR Colony, Karkardooma, Delhi and Ms. Aditi Patel of KVS, Nariana, Delhi Cantt. were the winner of Open Essay Competition in Junior and Senior level. The winners were given prizes by the Union Home Minister.

A film ‘The Incredibles’ was also shown during the conference, to showcase the operations carried out by NDRF personnel during disasters like earthquake, floods, etc.