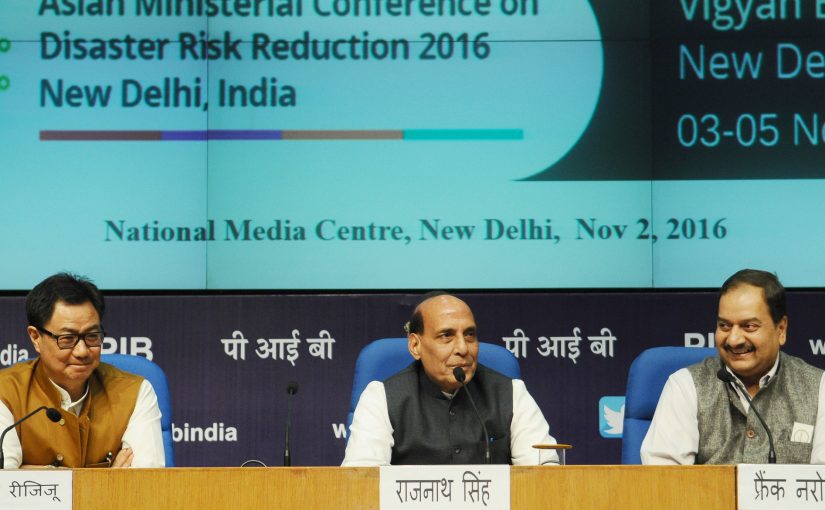 “The Prime Minister Shri Narendra Modi will inaugurate the Asian Ministerial Conference on Disaster Risk Reduction (AMCDRR) 2016 here tomorrow. This is the first major inter-governmental event after the adoption of the Sendai Framework for Disaster Risk Reduction (SFDRR). Scheduled to be held from November 3-5, 2016, this Conference will pave the way towards implementation of this Framework in the Asian region. It will also devise a mechanism for monitoring its progress.

The Sendai Framework, adopted at the third UN World Conference in Sendai, Japan in March, 2015, is the first major agreement of the post-2015 development agenda and identifies targets and priority action areas towards reducing disaster risk. India is committed to address issues concerning DRR and strengthen resilience to disasters. To realise this, Prime Minister Shri Narendra Modi launched India’s first National Disaster Management Plan, designed in line with the priorities defined in the Sendai Framework, earlier this year. The hosting of the AMCDRR 2016 reaffirms India’s commitment to the cause of DRR.

The Conference will discuss issues related to DRR in 6 technical, 22 thematic and 3 featured sessions during the Conference. The technical events will be broadly based on themes related to Risk Sensitive Development for Community Resilience. All the three featured events – Risk Resilient Infrastructure for Sustainable Development, Application of Science and Technology for prevention of new risks and Regional Cooperation – will be chaired by India. Led by governments as well as NGOs, academics and other stakeholders, the thematic sessions will be held in parallel on 3rd and 4th November. These sessions will dwell on issues such as Gender sensitive DRR, Child-centered DRR etc., at length.

Various DRR-centric activities will be organised during the Conference to spread awareness about disaster risk reduction and its role in safeguarding lives, livelihoods and infrastructure. These activities include a national-level painting competition for schoolchildren aged 10-14 years, a short films competition and an exhibition to showcase best practices in DRR. While the winners of the painting competition will be felicitated by the Minister of State for Home Affairs Shri Kiren Rijiju on 3rd November, the winners of the Short Film Festival will be felicitated during the closing of the Conference.

The commemoration of the first World Tsunami Awareness Day, to spread awareness about the dangers of tsunami and the importance of early warning systems in mitigating its impact, will also be held on 5th November.

On the closing day, the Conference will adopt the New Delhi Declaration, a political commitment of participating governments towards preventing and reducing disaster risk. It will also adopt the ‘Asian Regional Plan for Implementation of the Sendai Framework’. Voluntary statements of action of stakeholder groups towards a ‘shared responsibility’ approach in implementation of the SFDRR would also be adopted.

Pre-Conference events have been organised by interested governments, Inter-Governmental Organizations (IGOs), partners and stakeholder groups today to forge common positions that will feed into the Conference deliberations.

Three events were organised by the School of Planning and Architecture (22nd October), Indian Institute of Technology (26th October) and National Institute of Public Finance and Policy (27th October) in Delhi as curtain raisers to the AMCDRR 2016. Centered on the priorities underlined in SFDRR Students, these events were aimed at reaching out to students, academicians and professionals who may be able to integrate the concepts of DRR with their areas of expertise, such as financial planning, technology and architecture.

Senior-level governmental delegations from Asian countries are participating in the Conference. Besides these, many other stakeholders – international agencies, civil society organizations, academic institutions, private sector – will also participate. Nearly 4,000 persons, including about 1,100 foreign nationals, are expected to attend the Conference.

Established in 2005, AMCDRR is a biennial conference jointly organized by different Asian countries and the United Nations Office for Disaster Risk Reduction (UNISDR). So far, six AMCDRR conferences have been organised. India had also hosted the second AMCDRR in New Delhi in 2007.”

The Minister of State for Home Affairs Shri Kiren Rijiju and Members of NDMA, Shri R.K.Jain and Shri Kamal Kishore were also present in the briefing.