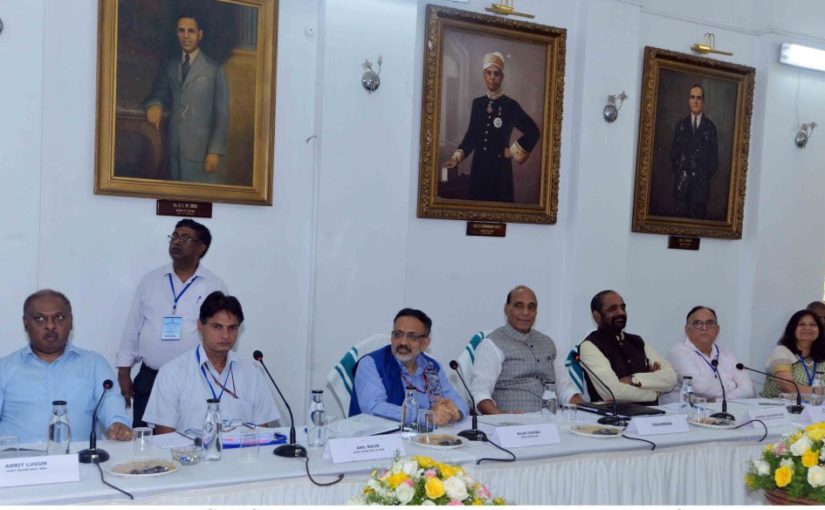 The Union Home Minister Shri Rajnath Singh today said that the Government was committed to strengthen and smoothen the twin processes of Immigration and Visa for the Indian citizens and foreigners. He was addressing the Parliamentary Consultative Committee meeting on Immigration Visa Foreigners’ Registration & Tracking (IVFRT) at Kochi in Kerala.

Underlining the importance of IVFRT, the Home Minister said that the Union Ministry of Home Affairs (MHA) was implementing the project in mission mode. “We need to facilitate safe and convenient entry inside the country to legitimate international travellers. We also need to provide all Visa related and consular services to foreigners staying in India in a faster and convenient mode”, he added.

Shri Rajnath Singh further said, “We also have to keep in mind the security aspect while facilitating easier immigration. At the same, there is need to track the movement of foreigners already present in the country”.

“This scheme ensures that the Foreigners do not have to meet any Indian official before their arrival at the designated landing port. MHA has now decided to increase the scope of this scheme to include e-Conference and e-Medical Attendant Visa also”, the Home Minister added.

“We are increasing the number of Departure and Arrival counters at major airports as well as providing Human Resource to the BoI to fast-track the immigration process”, said Shri Rajnath Singh.

The IVFRT project has been implemented in 165 Indian Missions abroad and 91 Immigration Check Posts (ICPs) and Biometrics software installation in 132 Indian Missions has been done within the given time.

On November 27, 2014 the Government launched e-Tourist Visa scheme in 44 countries. This e-Visa facility has now been extended to 165 countries. The government has installed e-Visa processing facilities at 25 airports and 5 seaports in the country. The MHA is now working to extend the e-Visa scheme to more countries in a planned manner after consulting all the stakeholders.

The extension of e-Visa scheme is aimed at encouraging tourism, business travel and health tourism in the country. After the introduction of e-Visa scheme more than 90 percent Visas are issued within 72 hours of application submission. The government has done away with Embarkation and Disembarkation cards for Indian citizens and foreigners to streamline the immigration process.

MHA has also introduced e-FRRO services for those foreigners who are staying in India and who need services like visa extension, visa conversion, exit permit, registration, change of passport details, change of address and others.