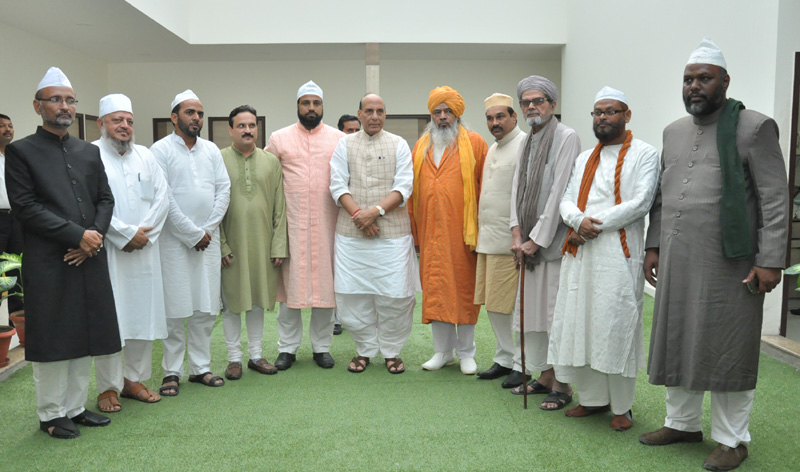 A delegation of heads of eminent Khanqahs and Dargahs led by the Chief of Ajmer Sharif have appealed the people in the Kashmir Valley to keep calm and peace there and help the Government to return normalcy in the state. Calling on the Union Home Minister here today, they assured Shri Rajnath Singh that they would go to Kashmir to request their brothers and sisters to contribute in creating peace.

Led by Dewan Syed Zainul Abedin Saheb, Spiritual Head of the Shrine & Sajjadanashin of Dargah Khwaja Sahab, Ajmer Sharif, the delegation shared their concern on the situation in Kashmir and expressed confidence that the Union Home Minister would do everything possible to bring normalcy in Kashmir in order to remove pain and miseries of the people. The spiritual leaders said they were pained by the situation prevailing in Kashmir, which has been the centre of Sufism for over 700 years.

The delegation further mentioned that over the last many years, we see a decline in social values and ethos, and onslaught of Western culture on one hand and increase of radicalism among Muslims on the other hand, doing incalculable loss to the shared cultural values, peace and happiness for the mankind. Dewan Syed Zainul Abedin Saheb said that the spiritual leaders are concerned and pained on the situation and the sufferings of the people in our country and all over the world. Worst, we see Islam, the religion of peace, being linked to many instances of violence and terrorism, he added.

The delegation opined that those creating disturbance in the world must know that there is no bigger power than the power of peace. Violence can only bring more sufferings and solve no problem of humanity, they noted. They emphasized that together we make a beautiful country for all to live in peace and harmony and progress faster.

The delegation highlighted that India is the land of Sufism and spiritual powers. Khwaja Saheb Dargah in Ajmer Sharif, Hazrat Nizamuddin Auliya Dargah in New Delhi and hundreds of Sufi centres all over the country have been the source of spiritual strength and guidance to the people of India and the world for over 800 years. These Khanqahs and Dargahs have been removing pains and miseries of millions of people seeking divine help every year, irrespective of caste, creed and religion.