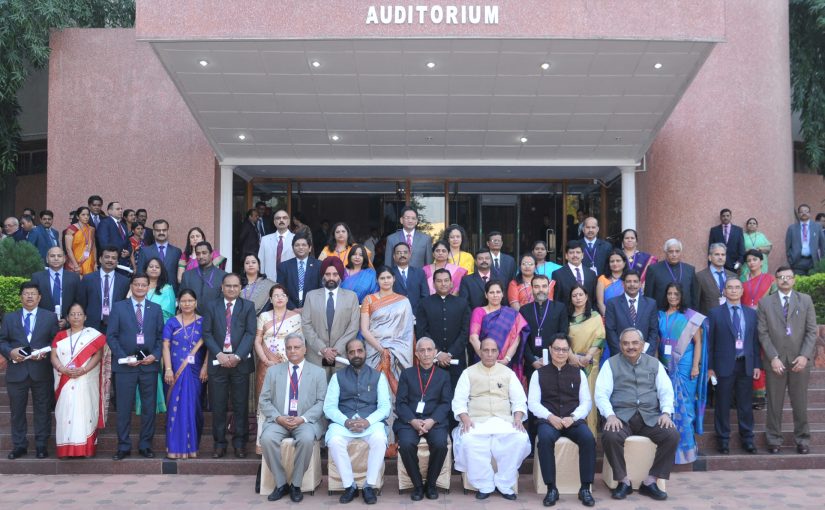 The Union Home Minister gave away the Indian Police Medals for meritorious service to officers of Intelligence Bureau and Ministry of Home Affairs. The 3-day Conference would deliberate on various security-related issues confronting the nation, and to come out with ways and means to tackle them.

Addressing the Conference, the Home Minister commended the efforts of the Police Forces of the States, UTs and Centre for all round improvement in the internal security situation in the country, be it insurgency in the North-East, Naxal activities, or the situation in J&K, where attempts to incite secession and law and order problems were made from our neighbourhood. He acknowledged the relentless efforts of Police forces of the States and Centre in handling these. He also lauded the coordinated efforts of Central and State intelligence for not letting ISIS indoctrinated youth in committing any act of terror in the country.

Shri Rajnath Singh held that that the recent demonetisation move of the Government would impair the finances of anti-national elements and groups. He emphasised on the need of exchange of information relating to best practices among Police personnel belonging to all States and Central agencies. He also desired that contribution of experts of various security domains, such as Investigation, Forensic Science and Prosecution, need to be appropriately recognised.

Earlier, on arrival at the Academy, the Home Minister paid floral tribute to the Iron Man of India, Sardar Vallabhbhai Patel and homage to the martyrs of the Indian Police Service, at the Martyr’s Memorial by laying a wreath.