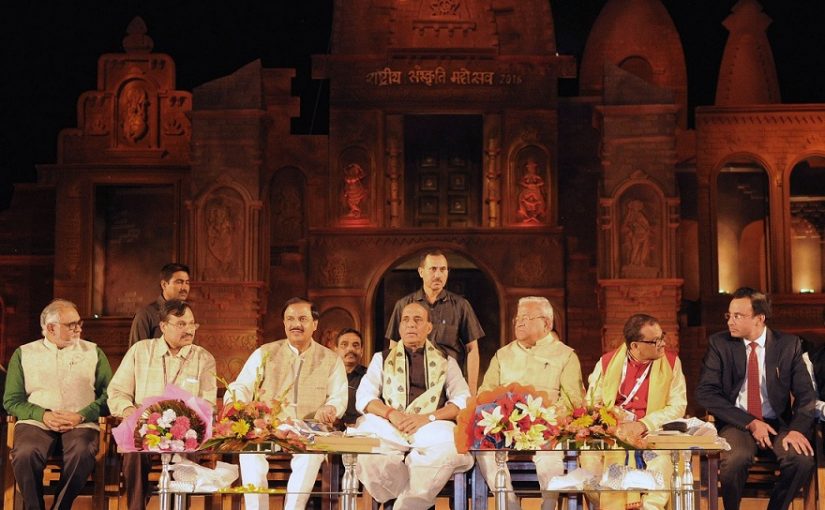 The Union Home Minister, Shri Rajnath Singh watching the cultural programmes at the inauguration of the 2nd Rashtriya Sanskriti Mahotsav, in New Delhi

The Governor of Nagaland, Shri Padmanabha Balakrishna Acharya, Union Home Minister, Shri Rajnath Singh, the Minister of State for Culture and Tourism (Independent Charge), Dr. Mahesh Sharma and other dignitaries at the inauguration of the 2nd Rashtriya Sanskriti Mahotsav, in New Delhi on October 15, 2016.

The Union Home Minister, Shri Rajnath Singh releasing a DVD after inaugurating the 2nd Rashtriya Sanskriti Mahotsav, in New Delhi on October 15, 2016.
The Governor of Nagaland, Shri Padmanabha Balakrishna Acharya, the Minister of State for Culture and Tourism (Independent Charge), Dr. Mahesh Sharma and other dignitaries are also seen.

Addressing on the occasion, Shri Rajnath Singh said that our there is unity in diversity in our country and it is the Culture which binds all of them together. He applauded the efoorts of Ministry of Culture in organizing such a unique cultural event which gives people from different regions a chance to showcase their talent, artworks and delicacies at one platform. Ministry of Culture plays a very important role in preserving our rich cultural heritage and in uniting our country.

Dr Mahesh Sharma in his address said, “We are delighted to bring to you the Rashtriya Sanskriti Mahotsav 2016, a cultural festival that will powerfully revive India’s heritage, like never before. The event brought together the art, artisans, dance, handicrafts, flavours and music from different regions, making itself the largest ensemble of Indian culture. While this event introduced and connected country’s youth to the various facets of our rich and vibrant culture, it also gave people from different regions a chance to showcase their talent, artworks and delicacies at a larger-than-life podium”. He further added, “We thank the Minister of Home Affairs of India, Shri Rajnath Singh Ji for kindly agreeing to inaugurate the festival and a special thanks to ICCR for bringing in a 12- member Ramayan group from Thailand, who showcased our culture in a different yet appealing style”.

A Coffee Table book on “Mandu” and a DVD on “Vandalism” brought out by Zonal Cultural Centres were released on the occasion.

The festival showcases a titanic variety of tribal and classical art forms from different cities and towns across the country accompanied by dance, music, drama, entertainment and food. The 24- acre IGNCA campus, came live to 35 food stalls, showcasing an assortment of regional cuisines such as ‘Makhan Malai’ from Lucknow’, Bamboo shoot’ from Nagaland, sweet delicacies such as ‘Jaleba’ from Haryana and many more. In addition, power- packed performances were delivered by different artists including folk, contemporary, aerial acts and more.

An exclusive play, showcasing the abduction of Sita by Ravana played by a group from Thialand sponsored by the ICCR, Ministry of External Affairs, through the scene- ‘in the forest near the Godaveri’ from Ramayana proved to be a visual treat for the audience. The pulsating festival also highlighted crafts & art forms along with a photo exhibition, depicting the rich heritage of India.