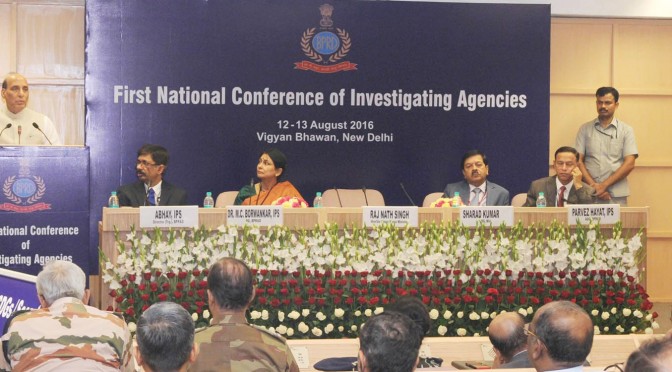 Conference will become a milestone in raising the standards of Scientific Investigation, says Home Minister

‘Best Investigator Medal’ to the Investigators to improve the quality of investigation
The Union Home Minister Shri Rajnath Singh inaugurated the first National Conference of investigating agencies here today. The two-day conference is being organised by the Bureau of Police Research and Development (BPR&D) in coordination with National Investigation Agency (NIA).

The Home Minister said that the crime is an act which is committed by persons with perverted mind or in adverse circumstances. He emphasised whatever the circumstances under which a crime is committed, crime cannot be accepted as legitimate by any civilized society. He said that crime control has basically two dimensions: prevention and detection. Prevention is the best remedy since crime is nipped in the bud. However once the crime is committed, quality of investigation is the foundation on which detection is based, he added.

Shri Rajnath Singh said that the Government has taken various steps to improve the quality of investigation. He said that in case of general crime, the Government has revamped the Crime and Criminal Tracking Network Systems (CCTNS) project for complete computerization of the working of police and extended it to court, jail, prosecution and forensic laboratories. Expressing his concern for women safety, he said that the Government is concerned about the crime against women and safety of women. To investigate the crime against women, dedicated Investigative Units on Crime against Women (IUCAW) are being established in 564 districts of India. He said that in these units, one- third of investigators will be women and funds will be made available by Central and State Governments, on 50-50 partnership basis. The Home Minister said that Central Government will spend Rs 324 crore in next 2 years on these units.

Shri Rajnath Singh said that our Government is committed for the empowerment and development of our Dalit brothers. He said that we have to create an atmosphere where our Dalit brothers can approach police without hesitation when they are victimized. He said that our government has strengthened Scheduled Caste and Scheduled Tribe (Prevention of Atrocities) Act by amending it in 2014 and by this amendment, a new category of offences has been added.

Expressing deep concern over the increasing incidents of cyber crime cases in the country, Shri Rajnath Singh said that the Central Government has established Indian Cyber Crime Coordination Center (I4C) at National Level to deal with all types of cyber crime. The I4C can be utilized for investigation of Cyber-Crime including Child Pornography and Online Abuse. One of the priorities of I4C will be to thwart attempts by international cyber gangs to penetrate Indian Networks and hack them. I4C will act a nodal point in fight against Cyber Crime and also as Early Warning System for Law Enforcement Agencies. It will also set up a platform for victims to lodge Cyber Crime complaints. I4C will also provide all necessary assistance to CBI and State police on Cyber Crime related issue. He said that due to widespread use of internet based Social Media by terrorists, we are facing new threats. To face these challenges, the present capabilities of specialized organization like Indian Computer Emergency Response Team (CERT-IN), Centre for Development of Advanced Computing (C-DAC) need to be strengthened.

The Union Home Minister said that the Government is committed to punish terrorists. The Government is working to strengthen the Unlawful Activities (Prevention) Act and the National Investigation Agency (NIA) Act. He said that the Government is also examining enactment of Mutual Legal Assistance in Criminal Matters Act to provide legal sanction for evidence obtained through Mutual Legal Assistance Treaties and remove doubts about admissibility of such evidence. He also said that during past two years, 1175 obsolete Acts and regulations have been repealed. Our challenges are increasing and to face these challenges, our Government is committed to amend or repeal old Acts and Regulations and enact new laws and regulation, if necessary.

The Home Minister said that BPR&D should conduct more research on investigation related issues including requirement of laws to solve the problems of investigation. He expressed hope that this will be a regular conference and it will become a milestone in raising the standards of Scientific Investigation.

On the above occasion, the Home Minister also declared award of ‘Best Investigator Medal’ to the Investigators, to improve the quality of investigation. He said that the Government may award 150-200 best investigators every year.

Delivering her welcome address, Dr M. C. Borwankar, DG, BPR&D, said that BPR&D provides high quality training and has completed about 200 research projects. She also said that best international standards should also be there in our country. She said that the outstanding investigation works should be rewarded which will work as motivation to the investigators.