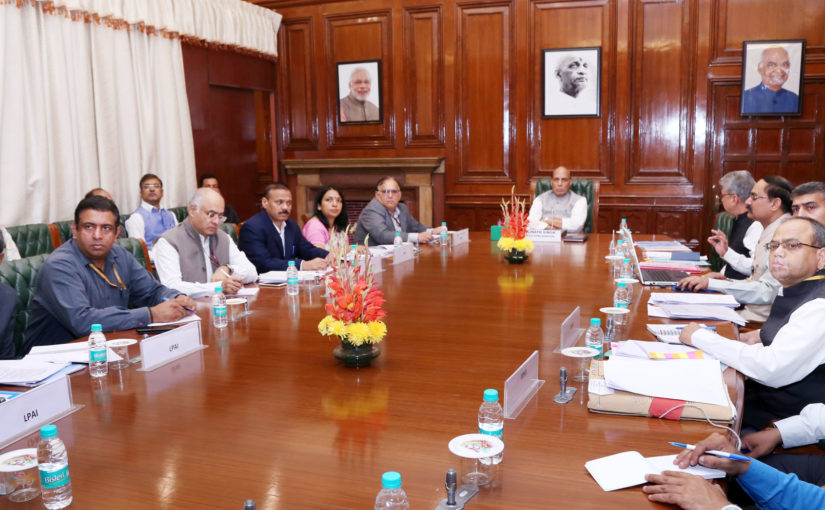 The Union Home Minister Shri Rajnath Singh today reviewed progress of ongoing projects being executed by the Land Ports Authority of India and the Border Management Division under the Ministry of Home Affairs. There was very good progress and Integrated Check Posts (ICPs) at five border crossing points out of seven approved projects have been completed. Terminals for smooth movement of goods and people at ICP Raxaul and ICP Jogbani on India-Nepal Border, ICP Petrapole and ICP Agartala on India-Bangladesh Border and ICP Attari on India–Pakistan Border have been made functional. At each ICP, facilities have been constructed for customs clearance, Immigration, warehouses for storage of goods, approach roads and terminal buildings to adequately handle import and export of goods and entry and exit of people. Work on ICP Moreh on India-Myanmar Border and ICP Dawki on India-Bangladesh Border is in advanced stage of completion. The total approved expenditure for the seven ICPs is more than Rupees 700 crores.

Union Home Minister Shri Rajnath Singh expressed satisfaction at the progress of work and directed the officials to complete the pending works at an early date. He also directed the officials to take up construction of additional 13 ICPs at Hili, Jaigaon, Ghojadanga, Mahadipur, Changrabandha, Fulbari, Rupaidiha, Kawrpuichhuah, Panitanki, Sutarkandi, Sunauli, Banbasa and Bhithamore and Passenger Terminal at Petrapole.

Under the Border Management Division, projects have been taken up for construction of 18 Coastal BOPs in Gujarat and improvement of Border Floodlighting in Punjab and Rajasthan. Some Floating BOPs have also been approved in Gujarat and West Bengal. Some projects which have been pending due to issues related to acquisition of land have resumed following Shri Rajnath Singh’s letters to Governments of West Bengal, Uttar Pradesh, Meghalaya, Tripura and Bihar.

Projects under the Border Area Development Programme (BADP) to improve road and mobile connectivity in the border villages as well as imparting skills to the people living there have also made good progress. To improve coastal security, 121 Coastal Police Stations have been operationalised, 30 jetties have been constructed and Biometric Cards have been issued to 18.5 lakh fishermen. Shri Rajnath Singh expressed satisfaction that the newly established National Academy of Coastal Policing has started functioning at Okha, Gujarat.