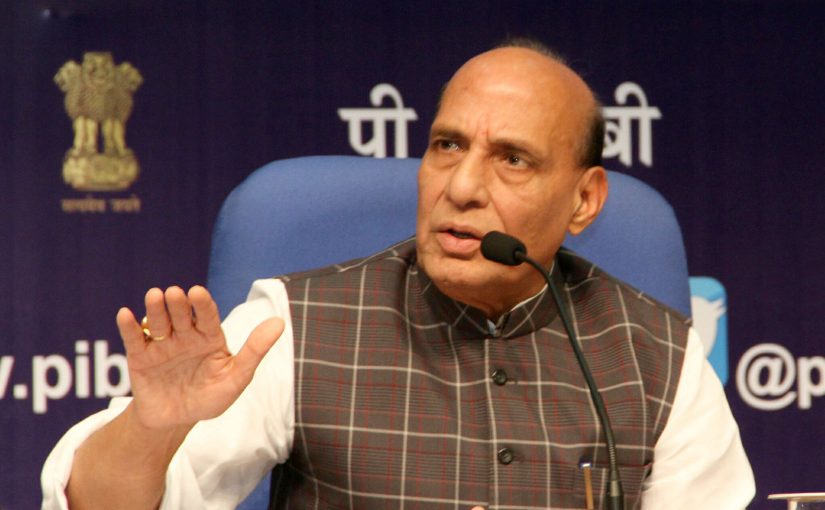 The Union Home Minister Shri Rajnath Singh briefed the media on the achievements and key initiatives taken by the Ministry of Home Affairs (MHA) during the last three years.

On the occasion, Shri Rajnath Singh also released a booklet on the initiatives and achievements of the Ministry.

Speaking on the occasion, Shri Rajnath Singh said that the Government has taken various initiatives for tackling the menace of Left Wing Extremism, problem in the North Eastern areas, Jammu and Kashmir and others. The security and development have been the utmost priority of the Government, he added.

The Minister said that the Government has taken various effective measures to bring peace and stability in the North Eastern Region of the country. Sustained security initiatives during the last three years have brought peace and stability to the North-Eastern region of the country after decades of insurgency. The year 2016 has witnessed the lowest insurgency incidents in the last 20 years. The insurgency incidents have reduced from 824 in the year 2014 to 484 in the year 2016. The number of incidents was 574 in 2015 which was the lowest since 1997 and has further reduced in 2016. The number of civilian casualties in the North East has also come down drastically in the last three years.

To tackle the menace of Left Wing Extremism (LWE), Shri Rajnath Singh said that in January, 2015, the Government has launched the National Policy and Action Plan comprising of security, development and ensuring rights & entitlements of the local communities. As a result, there has been a decline of 25% in LWE related incidents of violence and casualties to Security Forces dropped by as much as 42% during the period May 2014-April 2017 as compared to May 2011-April 2014. Also, the elimination of LWE cadres rose by a sharp 65% and the surrenders by LWE cadres recorded 185% increase. During a review meeting of the LWE-affected States, presided over by the Union Home Minister Shri Rajnath Singh on May 08, 2017, the Home Minister enunciated an operational doctrine ‘SAMADHAN’ to fight Left Wing Extremism. The elements of this strategy are S for Smart Policing and Leadership, A for Aggressive Strategy, M for Motivation and Training, A for Actionable Intelligence, D for Dashboard-based Key Result Areas and Key Performance Indicators, H for Harnessing Technology, A for Action Plan for Each Theatre and N for No Access to Financing.

The Minister said that in Jammu & Kashmir, after Surgical Strikes in September 2016, infiltration incidents have dropped significantly by as much as 45%. Under Prime Minister’s Development Package (PMDP 2015) amounting to Rs. 80,068 crore, Rs. 61,112 crore has been sanctioned for 63 Major Development Projects and Rs. 19,961 crore released. The remunerations of Special Police Officers enhanced from Rs.3000.p.m. to Rs.6000/p.m. and 10,000 additional SPOs sanctioned in addition to the existing 25,474 SPOs. There are several welfare schemes for displaced families from Pak occupied J&K, transit accommodation for Kashmiri migrants, monthly cash relief of Rs.2,500 per person and up to Rs.10,000/ per family for Kashmiri migrants and same relief sanctioned for the first time for Jammu migrants. Five new India Reserve Battalions have been sanctioned and also asked the State Government to provide 33% reservation for women. Nodal officer in MHA and State Nodal officers also appointed to assist the students of J&K studying in their states.

Shri Rajnath Singh said that the Prime Minister Shri Narendra Modi chaired the 11th meeting of Inter State Council on July 16, 2016, which was held after a gap of 10 years. The Government also revived the Zonal Councils with the Home Minister Shri Rajnath Singh having chaired 8 meetings of Zonal Councils, where 199 items were discussed and 87 resolved.

In pursuit of the SMART policing initiative laid out by the Prime Minister Shri Narendra Modi during the 2015 Annual DGPs conference, Shri Rajnath Singh said that the MHA has shared online nearly 28,000 best practices for replication by other states. The Crime and Criminal Tracking Networks and Systems (CCTNS) project is fast towards completion with the number of states/UTs sharing FIR data rising to 33, while this figure was nil in March 2014.The Total number of FIRs registered using CCTNS has leaped from less than 1.5 lakhs in March 2014 to about 1.25 crores, registering a jump of almost 100 times.

Giving push to border infrastructure and developmental works, the Minister said that the Government has sanctioned Rs. 5,188 crore worth projects in the last three years, of which Rs. 2,138 crore has been released for Indo-Bangladesh and Indo-Pak border projects. This includes 200 kms fence, 430 kms long border roads, floodlights spreading across 647 kms long borders and 110 composite border outposts. As regards to Indo-China border, out of 27 border roads sanctioned in 2008, first 8 roads have been completed during the period 2014-16 and while another 9 roads are due to be completed by this year end.

Shri Rajnath Singh said that a new initiative has been undertaken for creation of Model Villages in border areas for which more than Rs. 92 crore has been released to 7 states for development of 41 Model Villages, including 24 in J&K. To facilitate the border trade and passenger movement at land border crossings, the Government has been promoting the setting up Integrated Check Posts (ICPs). ICP at Raxaul was operationalised in June, 2016 and at Jogbani in November 2016. While the cargo terminal at ICP, Petrapole was inaugurated by Prime Minister of India and Bangladesh in July last year, foundation stone for an ICP at Dawki, Meghalaya was laid in January 2017.

To facilitate legitimate foreign travellers, Shri Rajnath Singh said that the Visa regime has been liberalised, simplified and rationalised during the last three years. E-visa facility has been extended to nationals of 162 countries. The duration of stay on e-visa has been increased from 30 days to 60 days. The Visa-on-Arrival scheme has been introduced for Japanese nationals from March 2016, while the duration of multiple entry tourist Visa for senior citizens from Bangladesh has been extended from one to five years.

The Minister said that India is playing a leading role in Disaster Management in the south Asian region. The Prime Minister Shri Narendra Modi has released the National Disaster Management Plan in June 2016, which is the first such plan in the world to integrate the four priority areas of Sendai framework. India also hosted the first South Asian Disaster Management Exercise in Delhi NCR while the city also hosted the 7th Asian Ministerial Conference on Disaster Risk Reduction in November 2016 where the Prime Minister announced the 10-point plan for DRR. The Government also raised two additional battalions of NDRF in the year 2015, for better coverage of Uttar Pradesh and Arunachal Pradesh.

Shri Rajnath Singh said that women’s empowerment and women’s safety have been a priority of the Government. The MHA has approved the 33% posts at Constable Level for being filled up by women. The 33% reservation of Constable level posts in CRPF & CISF and 14-15% posts at Constable level in border guarding forces i.e. BSF, SSB & ITBP will start immediately to begin with. The Government has also set in motion the setting up of National Emergency Response System (NERS) website and Mobile App which will be launched by October this year.

Shri Rajnath Singh said that on the occasion of Valour Day of Central Reserve Police Force (CRPF), the web portal and mobile application named “Bharat Ke Veer” was inaugurated on 9th April, 2017. The portal is an IT based platform, with an objective to enable willing donors to contribute towards the family of a braveheart who sacrificed his/her life in line of duty. The amount so donated will be credited to the account of ‘Next of Kin’ of those Central Armed Police Force/Central Para Military Force soldiers. The portal is getting good response from public. The Union Home Minister Shri Rajnath Singh also launched the Ministry of Home Affairs (MHA) Mobile Application for grievance redressal of the Central Armed Police Forces (CAPFs) personnel on May 11, 2017. The Mobile application has a provision for MHA to continuously monitor the action taken by various CAPFs on grievances of personnel and regulate the process for further improvement in the Grievance Redressal System.

During the press conference, the Ministers of State for Home Affairs Shri Hansraj Gangaram Ahir & Shri Kiren Rijiju, Union Home Secretary Shri Rajiv Mehrishi and other senior officers of MHA and heads of CAPFs and Commissioner of Delhi Police were also present.