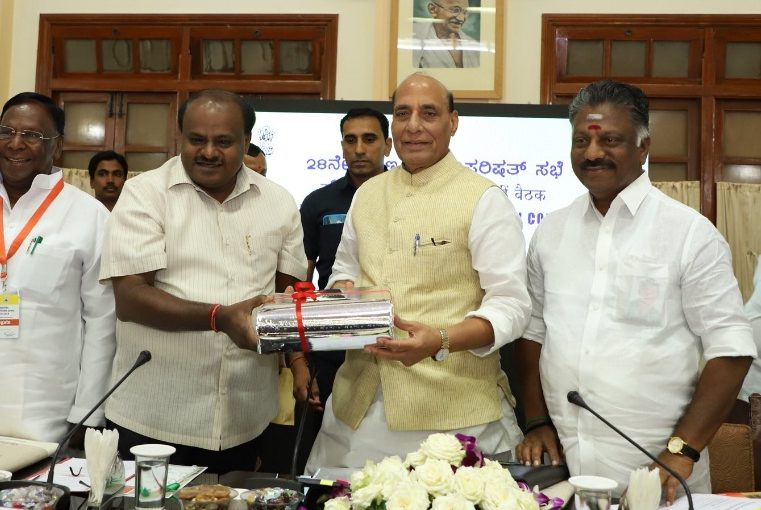 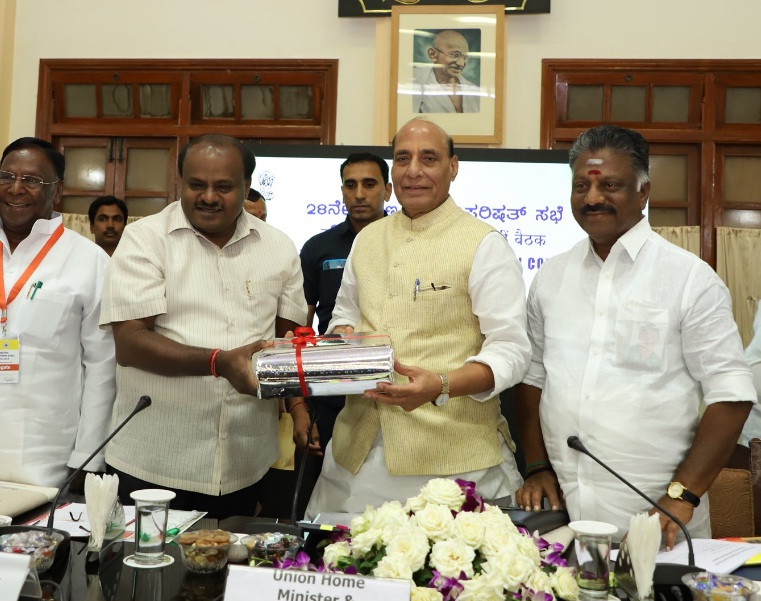 The 28th meeting of the Southern Zonal Council was held under the Chairmanship the Union Home Minister Shri Rajnath Singh in Bengaluru today. The meeting was attended by the Chief Ministers of Karnataka and Puducherry; Deputy Chief Minister of Tamil Nadu; Finance Ministers of Andhra Pradesh and Kerala Minister for Social Justice & Empowerment and Minister for Tourism, Karnataka; Minister for Health, Puducherry and Minister of State for Home, Govt. of India, Lt. Governor of Andaman & Nicobar Islands and senior officers from Central and State Governments.

The Council expressed deep sorrow and sympathy to the people who lost their lives and property in the floods caused by the fury of the Monsoon in the Southern part of the country. The Council was informed that Central Government would not lag behind in providing the requisite assistance to the States concerned in this regard.

The Council reviewed the progress of the implementation of the recommendations made at the last meeting relating to security to fishermen, introduction of peninsular tourism trains, uniformity in allocation of funds in proportion to population of SC/ST for scholarship for all the courses, optimum harnessing of renewable energy available in the Southern States without endangering grid security and development of Puducherry Airport. Thereafter, the Council took up issues which relate to Pulicat lake dispute between Andhra Pradesh and Tamil Nadu fishermen over fishing rights, menace of red sander smuggling in the holy Seshachalam hills, supply of Krishna water to augment the drinking water supply to Chennai city, issues relating to fishing in coastal States in Southern Zone, checking of Antibiotic residues in aquaculture shrimp export, scheme for modernization of State Police Forces in the States of Southern Zone, issuance of ‘No Objection Certificate’ (NOC) for LPG godown site plan, issues pertaining to Biofuels programme, etc. Out of the 27 items discussed today, 22 were resolved in the meeting.

Prior to this Council meeting, the Standing Committee of the Council met on November 28, 2017 at Bengaluru. In the meeting seven issues were resolved i.e. extension of High Speed Rail corridor between Thiruvananthapuram and Mangalore upto Udupi, revision of ceiling on Profession Tax by the Government of India, giving Infrastructure status to Housing by the Central Government, Inter-State Animal Movement, promotion of Oil seeds and Oil palm cultivation to augment availability of Vegetable Oils, inclusion of Puducherry in Central Finance Commission and security of fishermen from Puducherry.

The five Zonal Councils (Western, Eastern, Northern, Southern and Center Zonal Councils) were set up under the States Re-organisation Act, 1956 to foster Inter-State cooperation and coordination among the States. The Zonal Councils are mandated to discuss and make recommendations on any matter of common interest in the field of economic and social planning, border disputes, linguistic minorities or inter-State transport etc. They are regional fora of cooperative endeavour for States linked with each other economically, politically and culturally. Being compact high level bodies, specially meant for looking after the interests of respective Zones, they are capable of focusing attention on specific issues taking into account regional factors, while keeping the national perspective in view.

It was emphasized that it has been the objective of the present Government to strengthen the institution of the Zonal Councils as well as the Inter-State Council in order to promote and maintain a good federal atmosphere of cooperation among the States and between the Centre and the States as well. As a result, during the last four years, two Council meetings and three Standing Committee meetings of the Southern Zonal Council were held. Apart from this, eight Council meetings and twelve Standing Committee meetings of other Zones were also held. In these meetings, about 600 issues were discussed, out of which 406 issues were resolved.

Today’s deliberations of the Council were held in a warm and cordial atmosphere in the true spirit of cooperative federalism and ended with the decision to host the next meeting in Tamil Nadu.

Attended the 28th meeting of Southern Zonal Council at Bengaluru today. Today’s deliberations of the Council were held in a warm and cordial atmosphere in the true spirit of cooperative federalism. The Council has decided to hold the next meeting in Tamil Nadu. pic.twitter.com/lgUq8PFQSS