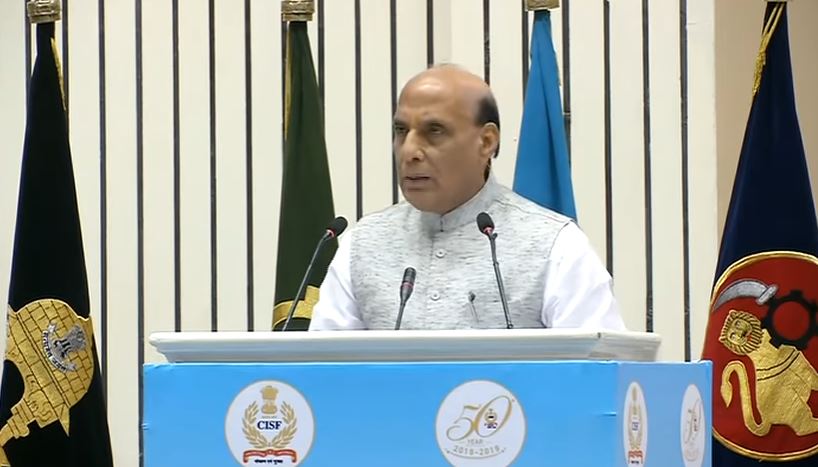 The Union Home Minister Shri Rajnath Singh has called for cooperation among all stakeholders to ensure foolproof aviation security. “I advise all stakeholders in the aviation sector especially the BCAS and the CISF to infuse new technology for aviation security and ensure a judicious blend of trained human resources and modern security infrastructure”, said Shri Rajnath Singh in his inaugural address at the International Aviation Security Seminar here today.

Underlining the terrorist threats to the aviation sector, Shri Rajnath Singh said, “Civil Aviation security continues to be an extremely challenging task as the sector remains an important target for terror outfits. The terrorists always look for opportunities where they can draw the maximum attention and media coverage.”

“Use of innovative methods to launch attacks on aviation sector are already in plenty. The case of Shoe Bomber in 2001, use of liquid explosives in London (2006) and the case of Underwear Bomber in Amsterdam 2009 clearly indicate that the terrorists are pushing the limits and even their underpants to hit the aviation sector,” he added.

Advocating global best practices in aviation security, Shri Rajnath Singh said, “We should adhere to stricter implementation of internationally agreed guidelines and norms. Introduction of updated, advanced technology in all airport processes would enhance our security capabilities. The Governments and aviation agencies have to increasingly think about newer methods to tackle conventional and unconventional threats.”

Underlining that there is not the slightest space for relaxation in aviation security, the Union Home Minister said the strength of any chain is determined by the strength of its smallest unit. Therefore, the security of these smaller airports should never be ignored.

“The security of these smaller airports should never be ignored. The Brussels and Istanbul airport attacks have shown the vulnerability of airports especially from the city side and it highlights new threats to aviation facilities,” he said.

Stating that India has witnessed massive expansion in the aviation sector, Shri Rajnath Singh said we have been constantly upgrading our security strategies and ensured its alignment with the changing threat perception.

“Keeping the threat of aircraft hijacking by terrorists, India has reviewed its legislation and preparedness towards such exigencies. The new Anti-Hijacking Act, 2016 gives effect to The Hague Convention of 1971 and the Beijing Protocol of 2010,” said Shri Rajnath Singh. “The new Anti-Hijacking Act is a testimony to our government’s concern for expedient measures to be taken during hostile acts of seizure or exercise of control of aircraft which jeopardize the safety of persons and property,” he said.

“As a matter of policy, unlike TSA (Transportation Security Administration) in the US which is also into physical security, our government has taken a conscious decision to separate the functions of security regulator from those being performed by regulated entities in the aviation ecosystem. This insulation addresses the fundamental problem of conflict of interest encountered in the regulatory framework,” he said.

The Union Home Minister said the overarching goal is to enhance global security by implementing uniform security measures around the world, a goal that cannot be achieved without an unwavering commitment from all quarters.