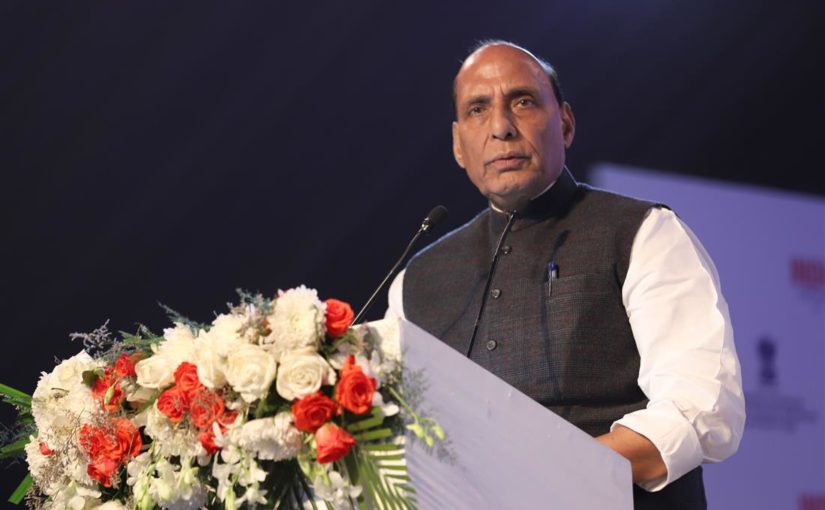 The Union Home Minister Shri Rajnath Singh has urged the ASEAN nations and the International Community to support India’s fight against terrorists and terrorist organisations. Delivering the Valedictory Address at the 4th India-ASEAN Expo & Summit here today, he said an environment of peace and security are prerequisites for trade and commerce to flourish. “This Summit must acknowledge the fact and ensure that the soil of any country should not be used for propagating terrorism,” he said.

Condemning the gruesome cowardly terrorist attack in Pulwama on 14th February on India’s brave security forces, Shri Rajnath Singh said that there exists immense potential to strengthen and deepen cooperation in combating terrorism in all its forms and manifestations violent extremism and radicalization through Information sharing, Law enforcement cooperation and capacity building and Anti-money laundering and countering terror-financing. 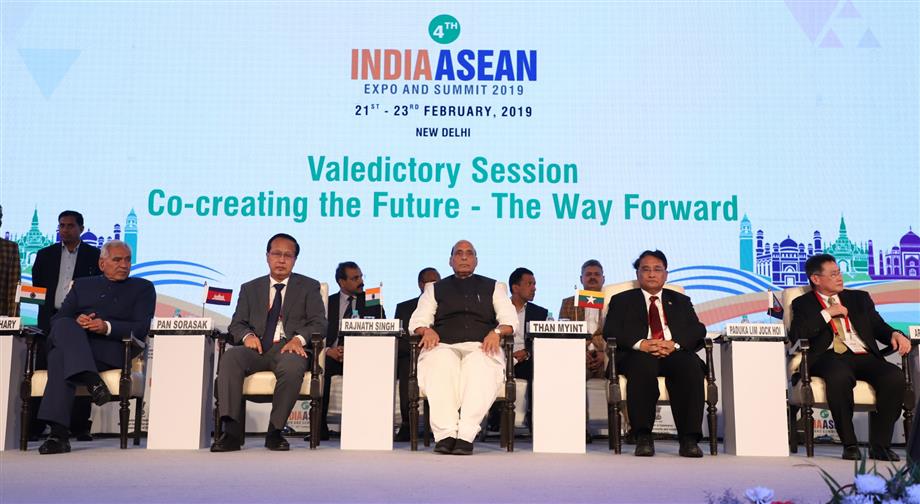 Recalling the Delhi Declaration of the ASEAN-India Commemorative Summit, which marked the 25th Anniversary of ASEAN-India Dialogue Relations, where it was agreed to deepen cooperation in combating terrorism in all its forms, the Home Minister said the 13th East Asia Summit (EAS) in November, 2018 in Singapore, also adopted the EAS Statement on Foreign Terrorist Fighters and Returnees and hoped that the cooperation between the member states will move beyond statements and towards more practical cooperation.

Speaking on the trade potential between India and the ASEAN, Shri Rajnath Singh said that more than half of India’s foreign trade now goes to the East. The Home Minister called for increased people-to-people contact, connectivity and trade ties with the ASEAN nations. “Strengthening India’s economic relations with the countries in the East is one of the main objectives of India’s ‘Act East Policy’,” said Shri Rajnath Singh. “Our engagement with ASEAN has acquired a new dimension with our Prime Minister’s vision to ‘Act East’,” he added.

Shri Rajnath Singh underlined that trade and investment is a key aspect of India-ASEAN partnership. “Over the past decade, trade and investment relations between India and ASEAN have continued to improve. Total bilateral trade has increased more than threefold from US$21 billion in 2005-06 to US$ 81.33 billion in 2017-18. ASEAN has emerged as the second largest trade partner of India in 2017-18, with a share of 10.58% in India’s overall trade.”

To further consolidate and deepen ties with the ASEAN, the Home Minister said India is currently working with ASEAN on multiple connectivity projects, – through land, water, and air. “Exploring opportunities through connectivity projects will help India to remove physical impediments to trade with ASEAN countries and further integrate the two regions for better economic and security relations,” said Shri Rajnath Singh. “While we have made some progress in implementing the India–Myanmar–Thailand Trilateral Highway, the possible extension of the Trilateral Highway to Cambodia, Laos and Vietnam, needs to be pushed. ASEAN and India are also working on the Kaladan Multi-Modal Transit Transport Project which will provide an alternative route through Myanmar for the transportation of goods to the northeast region of India,” he added.

The Home Minister said the Government has given boost to infrastructure in the North-East, India’s gateway to the ASEAN. “The North East being the major land bridge to ASEAN nations, enhanced connectivity will also ensure the economic integration and development of North East region of India. India and Myanmar are also in the process of setting up Border Haats at their respective borders to facilitate trade and people-to-people connect. The ICP (Integrated Check-Post) at Moreh has also been opened in January, 2019,” he said.

The Home Minister said Disaster Management is another area of cooperation between India and ASEAN. “The cooperation between India and ASEAN region has instilled resilience while dealing with disaster and climate risks. This cooperation must be further enhanced through various available mechanisms. As we climb new heights of economic growth, it is extremely important to keep our people safe from the consequences of disasters and risks through the use of technology and development of comprehensive safety and security measures to this end,” he said.

The Home Minister said India-ASEAN ties have deepened over more than a quarter century. “The year 2017 marked 25 years of ASEAN-India dialogue partnership, 15 years of summit level interaction and 5 years of strategic partnership. Celebrating 25 years of partnership, India and ASEAN are working towards a mutually beneficial engagement aimed at boosting prosperity for both,” said Shri Rajnath Singh. “ASEAN-India relations and our shared perspective towards facilitating bilateral and plurilateral arrangements stands out as a combined voice against the growing challenges in the region such as protectionism, climate change and terrorism,” he added.