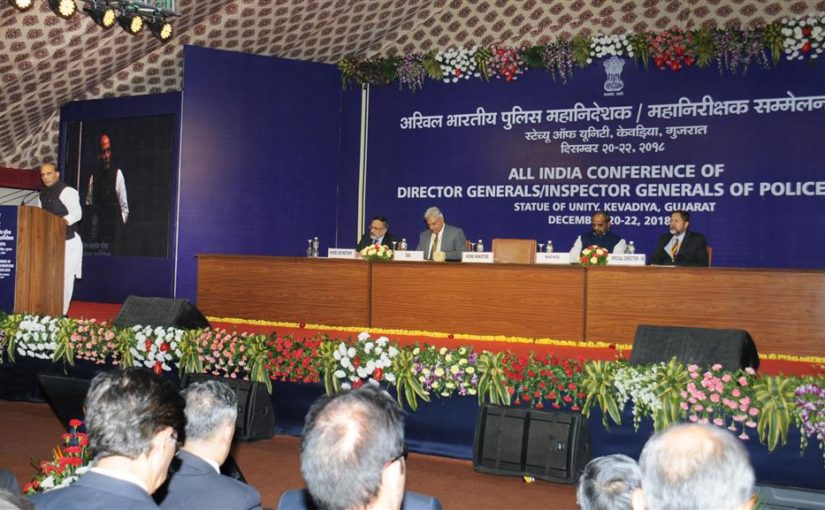 The Union Home Minister has said the Internal Security situation in the country has vastly improved, particularly in the North-East and the LWE affected States. Addressing the Inaugural Session of the Conference of Director Generals and Inspector Generals of Police at Kevadiya in Narmada district of Gujarat today, Shri Rajnath Singh noted with satisfaction the improving security scenario in the North-East, particularly the peaceful rollout of NRC in Assam including publication of the final draft NRC list on July 30, 2018.

“Security scenario in the North-East region has witnessed steady improvement in recent years. All parameters of violence have improved in 2018 in comparison to corresponding period of 2017. There is 17% decline in total incidents and 38% reduction in the casualties of civilians,” said Shri Rajnath Singh. “AFSPA was selectively relaxed in Arunachal Pradesh and Meghalaya, inviting positive public response. Besides, to encourage the militants to join the mainstream, GoI has revised the Surrender-Cum-Rehabilitation Policy by enhancing financial benefits to the surrendering militants,” he added.

The Union Home Minister said India’s security concerns have been conveyed to Myanmar even as efforts are on to harness the trade potential with the Eastern neighbour and beyond. “A number of our militant groups are operating from the territories of neighbouring countries, particularly Myanmar. Our concerns have been highlighted in the bilateral meetings with these countries. In order to plug the gaps on the Indo-Myanmar border, an Inter-Ministerial Committee headed by MHA has formulated a revised protocol for effective implementation of Free Movement Regime.”

Shri Rajnath Singh said violence in the LWE affected areas continues to improve since the last eight years. “We achieved major operational successes in core areas of CPI/Maoist in Chhattisgarh, Jharkhand and Odisha. Coordination among different State Police Forces and CAPFs, and generation of regular actionable intelligence was among the main factors which led to an almost two-fold increase in the losses suffered by LWEs this year.” “Reflecting on these successes and the upper hand of the government over the Maoists, after a comprehensive review the number of districts covered under SRE scheme were reduced from 126 to 90,” he added.

The Union Home Minister said the communal situation has also remained under control this year to date. “The communal situation during the current year remained under control, with a decrease of 12% in communal incidents as compared to the corresponding period in 2017,” said Shri Rajnath Singh. “Misuse of Social Media for religious denigration also witnessed a significant decline during this year,” he added.

Shri Rajnath Singh said terrorism in the hinterland has also been stamped out. “Law enforcement agencies, through concerted action coordinated by Intelligence Bureau, have managed to overcome the first tide of propaganda and mobilization by Islamic State in Iraq and Syria. Consequently, India witnessed very few incidents of IS inspired violence. In concerted counter-terrorism operations, Law enforcement agencies have arrested nearly 125 terrorist suspects as against 117 arrested in 2017,” said Shri Rajnath Singh. “The new phase of Islamic State propaganda emanating from Afghanistan-Pakistan region is also being countered effectively,” he added.

The Union Home Minister commended the National Investigation Agency (NIA) for clamping down on terror activities. “In countering terror, NIA is also doing very good work. A total number of 45 NIA Special Courts have been constituted in the States / Union Territories. The NIA, since its inception, has registered 183 cases till December, 2017, out of which, 135 cases have been charge sheeted. Trial has been concluded in 37 cases, out of which 35 cases have resulted in conviction. This is one of the highest conviction rates in the world by any Agency.”

The Union Home Minister said Pakistan is perpetrating terrorist activities on Indian soil from J&K to Punjab and the hinterland. Shri Rajnath Singh said the security situation in J&K continues to be vitiated even though the stone pelting incidents have declined. “Attempts by militants to infiltrate in large numbers, intermittent attacks by militants and efforts at local recruitment continue. Terror infrastructure in Pakistan and PoK remains in the form of training camps, launching pads and communication control stations. Financing from across for militants and separatists is a cause of concern. The separatists also exploit every possible situation to agitate the people to fan further anti-India sentiments which leads to law and order situation.”

The Union Home Minister directed the security establishment to check efforts to revive terrorism in Punjab. “In Punjab, recent terror incidents and related interdictions indicate concerted efforts on part of Pak-establishment and Sikh extremist elements based in Pakistan to revive terrorism in Punjab with active support of other Sikh radical/extremist entities based abroad, especially Europe and America. Pak-establishment is also seeking to forge an understanding between Sikh extremist groups and Pak-based Islamist outfits as well as Kashmir-centric terrorist groups for targeting Indian interests,” he said.

Shri Rajnath Singh said our “economic installations and iconic institutions” are also being continuously targeted from across the Western border through espionage and cyberspace. “Pakistan continues to abet terrorism and during the period January 01, 2017 to November 29, 2018, 17 ISI backed espionage modules have been neutralized in the country resulting in the arrest of 25 espionage agents which include 02 Pakistanis. Various sensitive organizations, including the Indian Army, Air Force, Navy, ITBP, DRDO, BSF, CRPF, MEA, Airport Authority of India, Ministry of Petroleum and Natural Gas and the Indian Railways, etc. have been targeted by PIOs from across the border through spoofed / crank calls to elicit sensitive information,” he said.

Shri Rajnath Singh said the Government is simultaneously pursuing diplomatic efforts to stop terror emanating from Pakistan. “India is a Member of Financial Action Task Force (FATF), an inter-Governmental Body, which makes recommendations relating to Combating of Financing of Terrorism, Money Laundering, etc. Efforts on this platform by India have ensured that Pakistan is rightly put on grey list.”

The Union Home Minister said while increased training and sensitisation programmes to cover critical installations spread all over the country are being regularly undertaken and sensitisation of top scientists and senior managers is being done in strategic and sensitive installations and sectors, including Atomic, Space, Defence, Power, Oil & Gas, etc. the State Police need to be alert on this front.

Shri Rajnath Singh advocated Public Private Partnership to boost cyber security. “What is important in Cyber domain is to harness tremendous talent lying outside the Government’s domain. In a move to create synergy, Industry associations such as Data Security Council of India (DSCI), NASSCOM, Cyber Forensic Labs, set up in certain States, have taken up tasks of awareness creation and training programmes on Cyber Crime investigation. These are welcome moves. Academia, like National Law School, Bangalore and NALSAR University of Law, Hyderabad are also engaged in conducting several awareness and training programmes on Cyber Laws and Cyber Crimes,” .

The Union Home Minister meanwhile asked officials to be cautious in their dealings with foreigners. “National Security has economic underpinning. In this area, two aspects become important. Firstly, interface of various foreign entities with the political and administrative structure increase manifold. Here, I would like to advice police and administration officials not to bypass prescribed procedure for interaction with officials of foreign missions which requires communication to be routed through Ministry of Home or External Affairs, except in cases where such contact is permitted according to the Protocol Hand Book,” he said.

Shri Rajnath Singh complimented the security establishment for continuously striving to make the country secure and safe. “It is undeniable that the Police forces give a sense of confidence to people and allay their fears over security. I also acknowledge that the Police Forces are working in difficult environment. I attribute the credit for India’s success in the area of security to her Intelligence Agencies, State Police Forces and Central Armed Police Forces,” he said.

The Union Ministers of State for Home Affairs, Shri Kiren Rijiju and Shri Hansraj Gangaram Ahir are attending the Conference from 20th-22nd December, 2018, being held at Kevadia, the venue of Statue of Unity.

Paid homage to the Great Son of India, Sardar Vallabhbhai Patel at the Statue of Unity in Kevadia, Gujarat. The Statue of Unity is a symbol of India’s firm resolve to maintain the unity and integrity of this country. pic.twitter.com/yB2Ospm3Po