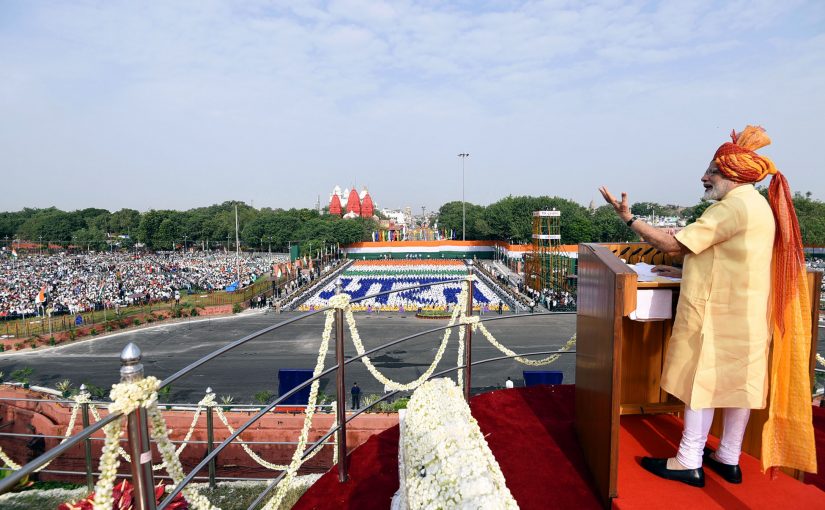 We have completed 70 years since Independence and now we are in an era distinctively different on every aspect from innovation, motivation and the direction in which the country is marching ahead. The Prime Minister’s address from the Red Fort on that Historic occasion had to reflect the same spirit and it certainly did. How was it different from the usual Independence Day speeches?

It has given a holistic view to the entire freedom struggle in the present day context. When he mentioned the Centenary of Champaran Satyagraha, 125th year of Sabarmati ashram along with 75th anniversary of Quit India, he made a reference to every major touch point that led to massive political movement of 1942.

When he mentioned the journey of nation from ‘Chakra Dhari to Charkha Dhari’ it was a portrayal of the inspirational values of our country from the ages unknown to the modern era. Thus clearly stating that we are an eternal nation in perpetuity.

As a colleague I feel the need to appreciate certain remarkable and distinct patterns emerging from his address, which reflect in his entire concept of governance almost like mantras. Broadly, there are several underlying themes into which the thrust of every single point he made can be placed.

At the very outset the Prime Minister recalled the contribution and sacrifices made by our freedom fighters and martyrs, who ensured that we remain fearlessly free indicating the sensitivity of this government towards its heroes, freedom fighters and those who attained martyrdom in the line of duty. He empathised with those affected by the Gorakhpur tragedy and the recent natural calamities like floods and landslides which have affected many parts of the country. This was a reassuring statement to the victims to make from the ramparts of the Red Fort, that even in its celebratory moments, the nation is sensitive enough to not forget those suffering and unable to celebrate.

It was heartwarming to see the Prime Minister making his government’s stand clear when he said “Na Gaali Na Goli” can resolve the complexities of Kashmir issue. On the contrary it could only be resolved by embracing the common Kashmiri. The Centre has been consistent in its belief that the common Kashmiri wants to be an active stakeholder in the peace process. They have been made victim by certain vested interests who do not want peace in the Kashmir valley. The Prime Minister in his speech appealed to those who take recourse to violence and exhorted them to abjure violence and adopt democratic means to voice their concerns and grievances.

Prime Minister Modi’s appealed to people to shun violence of every hue and shade, be it communal, casteist, or even a simple case of road rage. He also expressed solidarity with the women who were fighting a spirited battle against the malpractices of triple Talaq. The PM admired the courage of those women who stood up for their rights. It is a big shift from the 80s when the governments and the prime ministers were unwilling to discuss the plight of women and their fight for rights.

Our government is extremely sensitive to issues pertaining to women’s welfare and their wellbeing. The maternity benefits amendment has made India one of the most sensitive nation in terms of benefits for to-be mothers or mothers of new-borns.

The government’s concern for poor and weaker sections is well known to everyone. Our Prime Minister has dedicated his government in service to the poor. He reiterated his commitment from the Red Fort in his I-Day speech. Lamenting that there were projects that had been delayed for decades, he informed the nation that the work on those projects had been expedited as such delays affect the poor the most. Moreover, every rupee saved is a rupee earned for the benefit of the under privileged. The push for distributing LED lights is one such example.
In an outreach to the millennials, the children of the 21st century, PM Modi said that they were the real “Bhagya Vidhatas” of this youthful nation since they are the engine of India’s future growth. The youth of this country have been recognised as the ‘demographic dividend’ and the government has prepared an action plan to integrate our youth into the process of nation building.
The Prime Minister mentioned how the bar was set higher for his government right at the beginning when an SIT on black money was constituted through the very first Cabinet decision. Since then, many effective steps have been taken to strengthen India’s fight against corruption.

Steps like demonetisation, notification of the Benami Law and its enforcement to seize Rs 800 crore worth properties, crackdown on shell companies and post-demonetisation data mining to detect suspicious accounts have clearly underlined our Prime Minister’s integrity, the government’s intent and his decisive decision making ability.

On the security front the Prime Minister highlighted decisive actions taken both by the government and by the armed forces. The overall security scenario has considerably improved in the country since 2014. In his I-Day speech he also mentioned the One Rank One Pension scheme which was kept in a cold storage for decades. It was Prime Minister Modi who fulfilled the commitment of OROP and gave our ex servicemen their due.

Our armed forces have made innumerable sacrifices and gone the extra mile to protect our nation from its enemies. The best example of our forces taking extra ordinary measures to protect the country was when the Indian Army crossed the LoC conducting surgical strikes and successfully destroying terrorist launch pads close to border. Realising the need to showcase the valiant acts of our armed forces, I am happy that the PM announced the launch of a unique website to document and preserve the heroic acts of men and women in Indian armed forces who have been awarded gallantry awards.

The empowerment of India’s farmers is also an area of primary concern to this government. In his speech, issues of empowerment through the Beej Se Bazaar Tak approach of handholding – increased irrigation potential, crores of soil health cards, almost double the coverage of farmers under insurance than earlier, better access to markets, hitherto unseen level of government procurement of pulses, FDI in food processing to ensure better storage and supply chains – were all covered as part of the Modi Government’s lofty goal of doubling farm incomes by 2022.
Another notable focus in this theme was the focus on the under-developed Eastern part of the nation that despite its richness and industrious people has been kept backward. The Prime Minister mentioned empowering this region to perform to its full potential as a priority.

The Prime Minister called for an India where democracy does not end at the voting booth but just begins from there to form the bedrock of a participative democracy. His focus on people’s participation in issues of governance is commendable. In Lok Tantra he said, Lok should drive the Tantra rather than governments devising Tantra for the Lok.
Popular support for demonetisation, a smooth GST rollout, the citizen ownership of Swachh Bharat and people voluntarily giving up LPG subsidy to help the poor get gas connections were all examples of Team India’s Jan Bhagidari spirit, said the Prime Minister. In many of cases, including the Give It Up campaign to give LPG subsidy to help the poor get LPG connections, citizen participation was encouraging and remarkable. A new culture has set in – that of the people and the government coming together to act for a cause which was unheard of in the previous era of ‘trust deficit’.

This Jan Bhagidari is also the single most overarching theme emanating out of the Prime Minister’s speech on the 71st Independence Day. He called upon people to dedicate even the smallest things they do to the spirit of nation-building. Taking a cue from the great epics of Ramayana and Mahabharata he recalled how common cowherds stood with Shri Krishna to lift the Govardhan hill, and even a squirrel wanted to help Shri Rama build the bridge across the sea.

The Prime Minister also elaborated upon his vision of a New India – an India free of corruption, poverty, terrorism, casteism and communalism. Connecting it to the power of people’s participation, he said that this New India was possible only if 125 crore people made a ‘Samoohik Sankalp’ to attain the Siddhi in 2022. He likened the years between 2017 and 2022 to the 5 years between 1942 and 1947, the gap between Quit India and a Free India, and asked people to recreate that nation-building fervour.

Taking inspiration from our shastras, Prime Minister Modi stressed that the time is right to build a New India and we should not miss this opportunity. The journey from ‘Today’s India’ to ‘New India’ has already begun. The momentum has been built in the three years of this government. Now it has to be transformed into a mass movement and the Prime Minister exhorted the people of India to join this ‘New India’ movement stating that this could be a historic turning point in India’s independent history and in its quest for reclaiming the position of ‘Jagadguru’ in the comity of nations.

He stated the vision for future when he said we have got the ‘Swaraj” 70 years back now we have to transform it to ‘Suraaj’ or the righteous government. How will this goal will be attained? By ‘Bharat Jodo’ means all Indians firmly boding together. This has to be our path ahead in 21st Century.

He emphasised on internalizing the empowering attitude of “Badal Sakta Hai” rather than the passive “Chalta Hai” attitude which is prevalent. Do not ask why but ask why not, he said. बदला है, बदल रहा है, बदल सकता है… हम इस विश्वास और संकल्प के साथ आगे बढ़ें (We have to go ahead with the belief and resolve that our country has changed for better, is changing and can be changed).