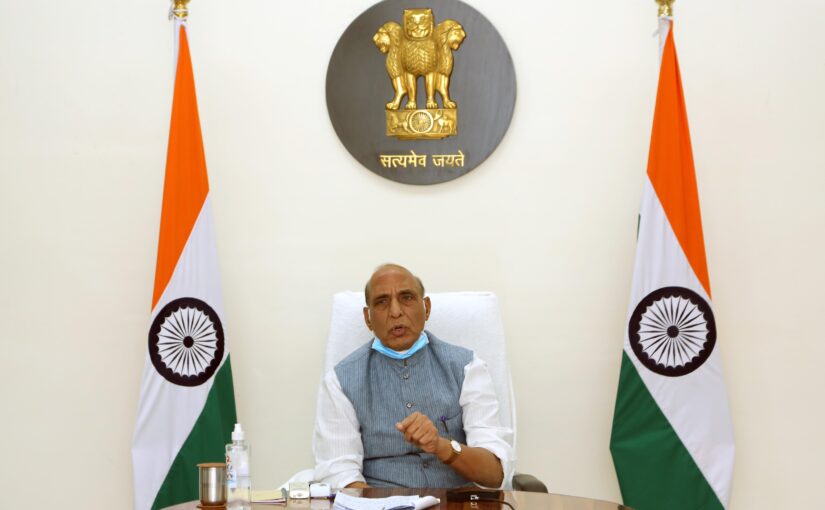 The surge of Covid-19 cases during the last 2-3 weeks has resulted in once in a century crisis.  Sensing the emergency situation, the whole Governmentmachinery immediately swung into action by mobilizing all possible resources. Along with the efforts put together by the scientific community, health professionals, civil administration,  the Armed Forces too have pitched in this battle against an invisible yet deadly enemy. Indian Army, Air Force, Navy, and other organisations of the Ministry of Defence like DG AFMS, DRDO, OFB, DPSU, NCC, Cantonments Boards, etc are engaged to help mitigate the sufferings of the people. Mobilisation of additional health professionals, setting up of new COVID facilities, deployment of IAF transport aircraft and IN Ships to provide logistic support to facilitate the supply of oxygen from friendly foreign countries and within the country and setting up of new oxygen plants are some of the ongoing efforts of the Ministry of Defence.

I have directed the Armed Forces to extend all possible assistance to the civil administration to tide over the crisis. People have great faith and trust in the capabilities of the Armed Forces. Emergency Financial Powers were granted to the Armed Forces so that Formation Commanders can establish and operate quarantine facilities/hospitals and undertake procurement/repair of equipment/items/material/stores, besides provisioning of various services and works required to support the ongoing effort against the pandemic. The powers were in addition to the emergency financial powers delegated to Director General Medical Services (Army/Navy/Air Force), head of Medical Branches at Formation/Command Headquarters of Army/Navy/Air Force/Andaman & Nicobar Command and Joint Staff including Command Medical Officers of Navy and Principal Medical Officers of Air Force (Major General and equivalent/Brigadiers and equivalent).

To tide over the immediate requirement of Covid care ready medical facilities  Armed Forces Medical Services (AFMS), Defence Research and Development Organisation (DRDO), Defence Public Sector Undertakings (DPSUs) and Cantonment Boards established  COVID hospitals/facilities in Delhi, Lucknow, Bengaluru, Patna and more are coming up in other cities as per request of respective state governments. Nearly 750 beds in various Military Hospitals have been set aside for civilian use while the AFMS also dedicated 19 hospitals, over 4,000 beds and 585 ICU units across the country. Base Hospital in Delhi has been converted into a COVID hospital with capacity being increased from around 400 to 1,000 beds.

DRDO has set up a 500-bed COVID-19 facility each in New Delhi and Lucknow, a 900-bed hospital in Ahmedabad and converted ESIC Hospital in Patna to COVID hospital with 500 beds. Work is in full swing to set up COVID hospitals at Muzaffarpur and Varanasi. DRDO is also offering technical support to state governments in setting up temporary COVID hospitals.

The AFMS has deployed additional doctors, including specialists, super specialists and paramedics, at various hospitals.  My Ministry has granted an extension to Short Service Commissioned Doctors of AFMS till December 31, 2021, which has augmented the strength of AFMS by 238 more doctors. To further strengthen the workforce of health professionals, those who have recently retired from AFMS have been re-deployed. To cater to veterans and their dependents additional contractual staff have been temporarily hired in 51 high-pressure ECHS polyclinics for night duty for three months.

In addition, DG AFMS is going to operationalise this week teleconsultation for Covid-19 related issues. Retired AFMS doctors are being engaged for this task.

Indian Army has mobilised its resources to assist the civil administration to tide over the current COVID-19 situation in the country. Army has provided 100 beds each at Lucknow and Prayagraj in Uttar Pradesh to cater to the surge in cases. In Madhya Pradesh, a 40-bedded isolation facility has been set up along with ambulances at Sagour. 100 beds each have been provided at Bhopal & Jabalpur and 40 beds at Gwalior. A 50-bed isolation facility has been established in Namkum, Jharkhand. In Maharashtra, 60 ICU beds have been provided at Pune and 20 at Kamptee while 100 beds have been provided at Barmer in Rajasthan. Besides, Army medical persons have been deployed at Ahmedabad and at Patna, battlefield-nursing assistants (BFNAs) have been provided to Patiala administration for hospital management. 200 drivers have been kept on standby for driving oxygen transporters to various parts of the country and 10 TATRA and 15 ALS vehicles are on standby to tranship medical supplies arriving at Palam airport.

Logistics support by IAF and IN

Indian Navy has deployed its ships to augment the mission for meeting the oxygen requirements. The first such consignment was brought in to Mangalore on May 5 by INS Talwar from Bahrain. Other Naval ships viz. Kolkata, Kochi,  Tabar, Trikand, Jalashwa and Airavat have been deployed for shipment of liquid medical oxygen-filled cryogenic containers and associated medical equipment from various countries in the Middle East and South-East Asia. The second batch of ships comprising Kochi, Trikand and Tabar mission deployed in the Arabian sea has also been diverted to join the national effort. Indian Navy also has the surge capability, to deploy more ships when the need arises. The Indian Army has repaired two civil oxygen plants at Agra to facilitate the resumption of supply of up to 1,800 cylinders per day.

DRDO initiated fabrication of 500 Medical Oxygen Plants under PM CARES Fund with the release of supply orders for 332 on Tata Advanced Systems Limited, Bengaluru and 48 on Trident Pneumatics Pvt. Ltd., Coimbatore. 120 plants will be produced by industries working with the Indian Institute of Petroleum, Dehradun, belonging to CSIR. Two such plants have been established in AIIMS and RML hospitals in New Delhi. The remaining plants are expected to be installed within three months. DRDO also developed a SpO2 (Blood Oxygen Saturation) supplemental Oxygen Delivery System for soldiers posted at extreme high-altitude areas. The system will be useful for COVID patients as their conditions become similar. Several DPSUs also fast-tracked the procurement of oxygen plants to deliver to local government hospitals in different states under CSR.

Additionally, orders for 23 mobile oxygen generating plants have been placed by DG AFMS on a firm in Germany. Delivery of these plants is expected in a week. Further, tender for 23 big sizes (300L/min to 750 L/min capacity) oxygen plants has been floated… This will help augment the supply of oxygen for Military Hospitals across the country.

Various DPSUs, including Hindustan Aeronautics Limited (HAL), and Ordnance Factory Board are providing COVID care services, including oxygen beds, at their facilities in several places across the country, in coordination with different state governments. A 180-bed COVID care centre, with ICU, oxygen and ventilator support, set up by Hindustan Aeronautics Limited (HAL) is functional in Bengaluru, Karnataka. The DPSU has also prepared a 250-bed facility in Bengaluru and handed it over to municipal authorities under Corporate Social Responsibility (CSR). A 70-bed facility in Koraput, Odisha and a 40-bed hospital in Nasik, Maharashtra are also operational. Work has also been undertaken by HAL to set up a 250-bed COVID care facility in Lucknow, Uttar Pradesh. HAL is planning to provide more ventilators and oxygen points at Bangalore and Lucknow.

Services of NCC officers, JCOs and ORs have been placed at the disposal of Armed Forces and to support the state governments in the fight against the second wave and also assist them in the vaccination drive.

The Armed Forces and various establishments of MoD are not just providing support to the civil administration/state governments in fighting the current situation but are also playing a pivotal role in conducting the vaccination drive launched by the government across the country. All the efforts and initiatives by the Armed Forces and various organizations of MoD, some of which enumerated above, are being done without compromising the objective of defending the nation from any external threat.

As the whole of India stands united in the fight against the current surge in the pandemic the Armed Forces are walking the extra mile for the nation to emerge a winner. Hard times demand the manifestation of an indomitable spirit to fight against the odds and that is what the country is doing at the moment.