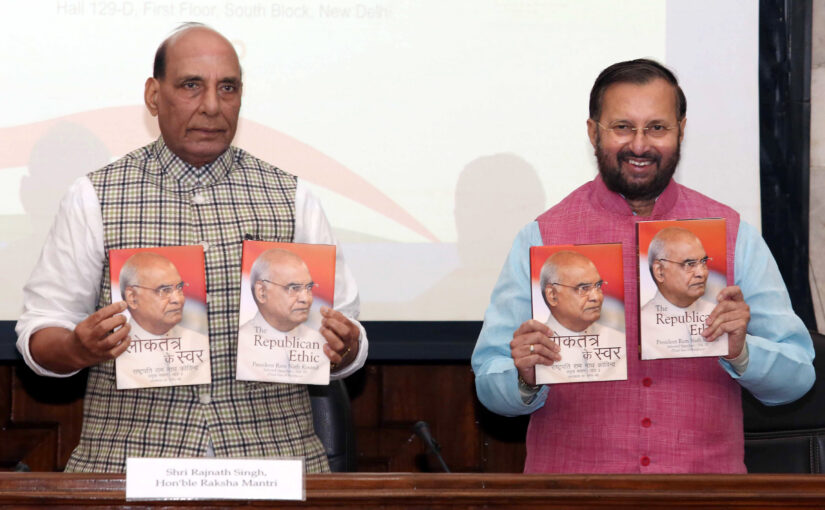 Speaking on the occasion, Shri Rajnath Singh said that this compilation of speeches of President Shri Ram Nath Kovind presents a comprehensive picture of his work, personality and values. In these speeches, the preferences of a sensitive and idealistic public servant, a fair person living life based on morality can be seen. He said that the President considers public service the ultimate religion which is evident in his many speeches. The President also underlines the importance of Indian values in his addresses which have a greater impact because these values are part of his personal life, added.

Speaking about his persona Raksha Mantri said there is no gap between the words and deeds of the President which is a mark of great personalities.  In conversations, he often leaves deep impact on the listener. His speeches flow out naturally and in a simple way reflecting the core values of humility, service to the poor, empathy, and compassion to all living beings, Shri Singh added.

Raksha Mantri said the concept of future India, along with glimpses of hopes and aspirations, avenues for achieving them have also been outlined in these speeches. He said that all the voices of our diverse society and culture and our vibrant democracy find expression through the speeches of the First Citizen of the country. Shri Rajnath Singh  said  that this collection would be an invaluable document for understanding contemporary India.

Shri Rajnath Singh said a glance of the President’s speeches depicts his concern towards issues such as girls education, empowerment of women, welfare of the weaker sections   which reflects his elevated mind. Raksha Mantri said he knew President Ramnath Kovind for a long time and always found him a man of large heart and high moral values. Referring to President’s desire to visit the forward posts including the highest battlefield Siachen, Raksha Mantri said that this shows his resolve towards uplifting the spirits of soldiers fighting on our borders.

Recalling an incident where   President Ramnath Kovind touched the feet of his former teachers, Shri Rajnath Singh said the gesture not only showed his respect towards his gurus but also set an example to the students.

Information and Broadcasting Shri Prakash Javadekar released the e-version of the book on the President’s speeches. He said this compilation of President’s speeches reflects the confidence of the nation. This book will be of reference value to all those who would like to study India in these times and could be a valuable addition to libraries of Institutions as well as individuals.

Secretary M/o Information & Broadcasting Shri Amit Khare while thanking Raksha Mantri Shri Rajnath Singh and Information and Broadcasting Minister  Shri Prakash Javadekar for their support in the release of these volumes, appreciated the Publications Division’s role in the compilation and production of the book.

The ‘लोकतन्त्र के स्वर’ and ‘The Republican Ethic’, published by the Publications Division, Ministry of Information and Broadcasting, Government of India, are series of books of collection of selected speeches of the President of India, Shri Ram Nath Kovind in Hindi and English respectively. The third volume, released today, contains 57 selected speeches of the President delivered during the third year of his presidency.